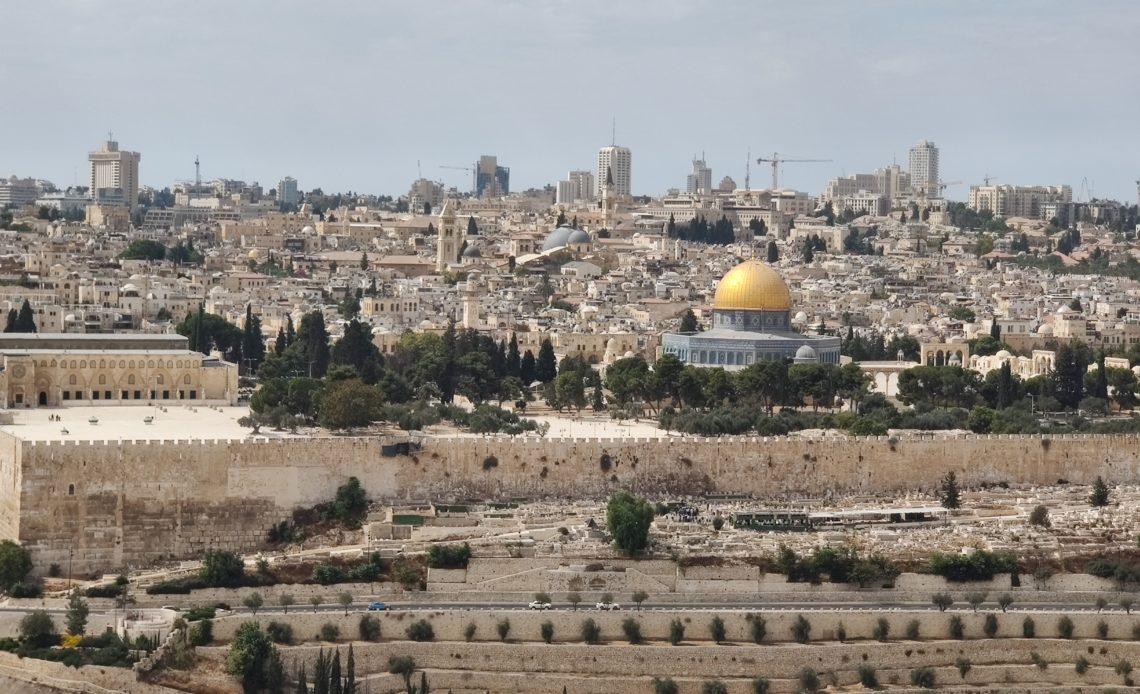 Combattants for peace is a movement formed jointly in 2015 , during the 2nd intifada, by Palestinians and Israelis who were both involved directly in the conflict: Israelis who served in the army and Palestinians who were convicted or imprisoned for their acts of violence. They made a documentary, « Disturbing the Peace », which shows how former enemy combatants have come together to form an association promoting peace.

The organization has various local regional groups, led by duos of Israeli and Palestinian coordinators, organizing non-violent resistance actions to protest against the occupation system. They also work in different ways on informal education programmes, with youth movements, schools or military service training programmes. Each group adapts to its local realities and uses specific means of action. In addition to these local groups, there is a special group for women activists, which promotes gender equality, and a group that works on different ways of using theatre as a tool for activism.

Members of Combattants for Peace conduct two-voices testimonies, proposed by a Palestinian and an Israeli, in front of groups of young people, high school and university students. They share their life stories and explain how they have come to see as allies those whom they see as enemies. They wish to show that people and mentalities can change and propose a double narrative of the Israeli-Palestinian context, which today can appear to be permanently blocked.

They created a program for young Israelis leaving military service, which allows them to spend 6 weeks in Jerusalem to study Palestinian culture and the situation as it is experienced in Gaza, or to take Arabic classes.

The Parents Circle is an Israeli and Palestinian organization that brings together more than 600 families who lost someone in the conflict. They work on reconciliation by sharing their grief and their different narratives. Many projects are used to allow Israeli and Palestinian participants to share their personal and national stories, using such emblematic places as the Yad Vashem memorial or the Lifta village (destroyed in 1948). In 2014, Parents Circle set up a tent in a square in Tel Aviv, which remained in place for 70 days, where activists took turns challenging passers-by, whether they were allies or enemies of the association’s values. They shared their personal stories and held moments of dialogue open to all on subjects as diverse as the Israeli-Palestinian conflict, Israeli Arabs, local initiatives, the place of women in peace processes, or the legal and political analysis of the conflict.

Parents Circle has a specifically women’s group that works on the place of women in peace processes. They have organized a number of events and art projects on this theme. In 2013, the project « The Presence of the Void » allowed women, mothers, sisters, daughters, nieces, who lost a loved one in the conflict to exhibit photographs they have showing the person who died. They also jointly produced a cookbook, which they cooked together. In 2009, the exhibition « I see you, I see me » showcased family photos belonging to Palestinian and Israeli women on mirrors so that viewers could make the connection between their present and the influence that the past represented in the photograph can have on it.

Combattants for Peace and Family Circle have organized a joint Israeli-Palestinian memorial ceremony every year for the past 14 years. On 07/05, thousands of Israelis and Palestinians come together to mourn their dead together, and to transform victimized narratives and demands for unity. More than 55,000 people from around the world participate in the event from a distance. In 2017, far-right protesters threw urine and garbage on grieving families to demonstrate their refusal of unity. These people were invited to dialogue workshops throughout the following year, and even they eventually accepted the message of the ceremony. The event is repeatedly attacked by citizens or by the Israeli government, but it continues to gather a larger audience every year. The ceremony is financed entirely by donations.

Roots is an Israeli and Palestinian civil society movement that aims to foster dialogue and mutual understanding. They organize monthly inter-religious exchanges, conferences, and think tanks on various themes. For Ramadan, they set up shared iftar during which Israelis come to share a meal with Palestinians. They have many informal education programs, accompanying young people after school or before their military service. Many Roots projects are carried out in Gush Etzion-Bethlehem, one of the tensest settlements. In this space, the organization has set up a community center on a small strip of land that is freely accessible to Israeli settlers and Palestinians, where they can sit down for exchange and dialogue.

Their « incident response » team is made up of Israeli and Palestinian citizens who come to visit sites or families under attack, from both sides of the conflict, to show their solidarity and condemn all forms of violence. They created channels of communication between leaders and citizens of neighboring communities of Palestinians and Israelis, who come together in times of tension to share strategies to stem the escalation of violence.

Mahapach-Taghir’s work focuses mainly on feminism, community activism and Israeli-Palestinian cooperation (the association is under the shared leadership of two Jewish and Palestinian women). The organization began as a learning center for children, and quickly became a center for community activism and a platform where women’s groups and students can exhibit their Jewish and Palestinian narratives. The organization has developed learning centers in seven communities: Florentine, Kiryat Schmona, Kiryat Yovel, Maghar, Tamra, Yaffat elNassera, Yad Eliyahu, Tira. It accompanies more than 600 children and families and facilitates the training of more than 150 university students in Israel. The way it works is simple: the students work with the children to help them develop their critical thinking skills and encourage them to talk about their traditions and identity. Through the development of this critical pedagogy with children, students are trained to become community leaders. Parents, especially women, are given extra time while their children are being cared for in the learning centres, so they can get involved by participating in some of the community meetings organized by Mahapach-Taghir on the basis of common local interests. The next level of action is national: the organisation invites different groups to get to know other communities that are struggling and fighting for better opportunities. With the twinned community projects, they invite communities living one or two hours away from each other to meet four times a year to develop joint projects. One of their best achievements has been a joint play day organized by the Jewish and Palestinian communities for their children.

Interfaith encounters has been working for 18 years to create local interfaith groups in different regions of Israel and Palestine. More than 105 groups bring together citizens of different religions, Christians, Muslims and Jews, including Israeli settlers and Palestinians (especially in the Hebron area). The groups are created on the basis of common interests, be they geographical or other (age, themes…). Interfaith encounters brings together, for example, groups of teenagers, or musicians, or students from two Palestinian and Israeli schools who meet within the framework of MUNs (United Nations models). The groups meet at least once a month, but often more, to exchange around predefined themes that cut across 4 categories: the annual cycle (holidays, religious holidays, calendars…), the life cycle (marriage, divorce, adolescence, abortion, circumcision, euthanasia…), stories or characters that appear in sacred or other texts (clothing, laws, status of women, charity…). A manual is proposed to help each group to animate its events in the simplest possible way. Often, the representatives of each religion prepare a presentation of a few minutes on the proposed theme and then the discussion begins. The challenge is to artificially create conversations that are as natural and fluid as possible. Apart from this, each group develops its own specificities and processes.

Peres Center for peace and innovation

The Peres Center for Peace aims to create social bonds in Israel and Palestine by bringing together thousands of beneficiaries of different ages, genders or religions through projects focusing on sport, entrepreneurship, health or environment.

The Peres Center has created junior football teams that bring together Jews and Arabs, Israelis and Palestinians, girls and boys, for joint training throughout the year. They have also trained dozens of young people in sports methodology, so that they can set up workshops on fair play that engage mixed teams of Jews and Muslims to create their own rules for teamwork, based on the most fundamental sporting values. For example, the team will decide that a goal only counts if it was scored by a pass between Palestinians and Israelis.

The Peres Centre creates channels of dialogue between families and hospitals to enable Syrian and Palestinian children to be treated by trained Israeli teams with better equipment. This requires a great deal of administrative cooperation, and also operational cooperation, since there is a need for coordination to help them pass through checkpoints. Beyond the lives saved, the project creates links between all the chains of cooperation involved in the implementation of the treatment. Often, the programme also brings together Israeli and Palestinian families who are waiting in the same waiting room during their children’s operations and are therefore going through common hardships. A programme at the Peres Centre also trains Palestinian doctors and surgeons in Israel for several years.

The Peres Center has created one of the first start-up incubators in Palestine, to help develop Palestinian innovation and build bridges with the rapidly growing Israeli entrepreneurial ecosystem. It has also set up a partnership programme between Palestinian and Israeli companies to enable them to be exposed together to opportunities that would benefit them equally.

The Peres Center is also developing ecological cooperation. One of their programmes brings together Israeli, Palestinian and Jordanian researchers to work on invasive pesticides. One project also enables Arab and Jewish Israelis and Palestinians to create green roofs on community centres.

Rabbis for Human Rights is an Israeli organization of rabbis who use their influence and moral stance to uphold human rights in Israel and Palestine. They carry out a number of non-violent actions and protests.

For example, they accompany Palestinian farmers during the olive harvest: a time when they are particularly vulnerable for those whose fields are close to Israeli settlements. It is not uncommon for them to be attacked by citizens or army forces in such cases, and the presence of rabbis at their side helps to ensure their safety and prevent stones from being thrown at them, among other things. The rabbis help them to harvest the olives, and form human chains around them in case of attacks. Rabbis often gather to sit in front of the bulldozers demolishing Palestinian homes. Finally, the organization has a legal team to accompany Palestinian victims of abuse in Gaza.

Rabbis for Human Rights also carries out many educational activities, both formal and informal. In particular, they are present in a number of pre-military academies, where they prepare future members of the army to respect Palestinians, Arabs and Muslims during their service. To this end, they raise their awareness of Palestinian narrative, organize thematic visits and interreligious and intercultural encounters.