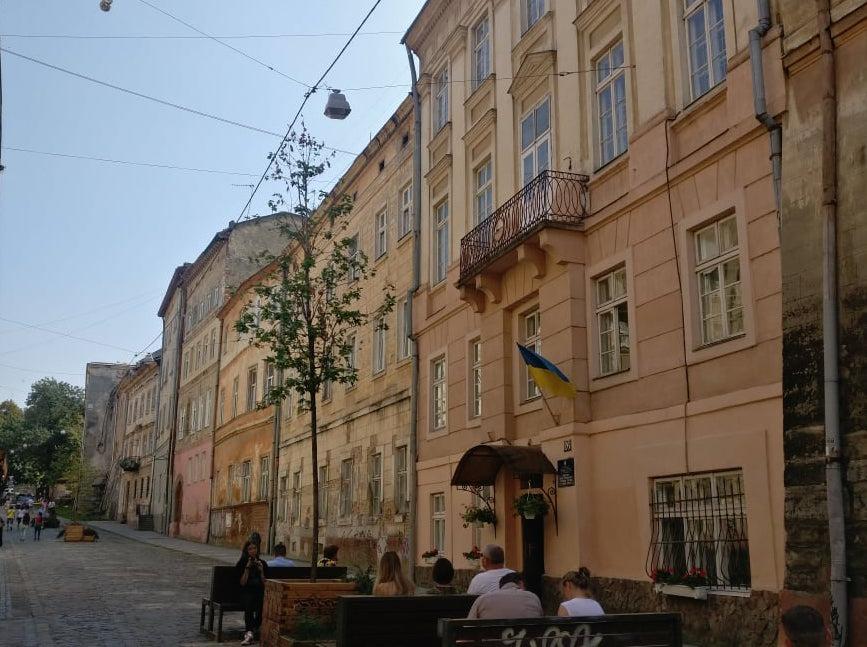 The Youth Contact Group is an OSCE-supported youth initiative created in 2015. As of today, Ukraine struggles to reconcile the various narratives within its respective regions. The recent war that seized the country only a few years ago has only worsened the situation. The Youth Contact Group attempts to bring together young people from these different regions: originally, 9 members were from Donbass, 4 others from the east and centre of the country, and 3 from the west.

Their first project was the « Ukrainian Bridge »: participants had to fill out a form in order to be paired with a penpal – from another region – with whom they would exchange emails. Many of them ended up visiting one another and became ambassadors for the struggle against prejudice in their own regions. No less than 200 young people volunteered in the first year, and the project has only grown, so much so that the Youth Contact Group created a website on which participants can stay in touch and act on the same platform.

Today, the Youth Contact Group continues to develop many projects to create inter-regional ties in UKraine. Recently, they organized a gathering of young painters from different regions, who were invited to reproduce the same landscapes and objects with their own eyes and techniques, to create an exhibition from their works.

The Libertas Center aims to promote interreligious dialogue in Ukraine at different levels. On the academic level, it organizes conferences and seminars on interreligious issues. For example, the Libertas center is organizing an « Interfaith Expresso »: the idea is to pack in the space of a day (just like an espresso), the basic knowledge about the main religious communities in Ukraine. The courses are given by researchers or religious leaders.

Since the beginning of the Crimean crisis and the Donbass war, the Libertas Center has evolved towards organizing social activities in which different religious communities would get involved and seek the benefit of people in need or displaced. For example, it organized events for war widows and families of victims and offered psychological support, which is currently lacking on a national scale.

The school of interreligious journalism

The Interfaith School of Journalism is a project created in 2017 by a student, Lidiia Batig, in partnership with the Libertas Center. The goal is to fight against the lack of knowledge about religious traditions, beliefs and practices, which leads to strong symbolic violence and the rise of stereotypes and prejudices in the media. Every year, journalists, economists, writers, psychologists, linguists, lawyers of different religious backgrounds are selected and trained to question question their ethics, and meet religious leaders. To this end, the school organizes joint cultural events, such as inter-religious film or poetry festivals. They also set up round tables and conferences on religious issues, visit Christian places of worship, synagogues and Islamic centres. The ultimate goal is that journalism should no longer be used as a tool for religious propaganda, but as a means to stop it.

The Council has brought together representatives of 16 religious organizations for 20 years, with a rotating presidency. Closely linked with the Ukrainian government and parliament, the council advocates for laws on inter-religious issues, including the one on religious representation within army chaplains, hospitals and prisons.

The Council works as a mediator between religious communities and political leaders. In 2014, The Council was involved in the demonstrations that led to the Euromaidan revolution. The religious leaders on the council set up a chain between the student protesters and the police force to prevent the latter from firing into the crowd.

Today, the Council addresses many societal issues such as the fight against religious based discriminations and prejudices. However, it should be noted that one of its objectives is also to « defend a traditional vision of the family and marriage based on religious moral values »: this position carries the risk of leading to discrimination on the basis of sexual orientation, or to homophobic behaviours. This objective therefore represents a strong limitation in the use of the inter-religious tool in the service of freedom or equal rights, which are essential prerequisites for peace-building.

Since 2001, the Institute for Religious Freedom has been defending freedom of opinion, conscience and religion in Ukraine. It organizes meetings with different religious leaders to promote dialogue and mutual understanding. It also plays an important role in monitoring religious restrictions and persecution in Ukraine, particularly in the Donbass and Crimea regions, and informs the media and international organizations about these issues. Lastly, the Institute works as a consultant on inter-religious issues for state institutions, and even participates in the drafting of laws on religious freedom. However, the Institute shares the position of the National Council of Churches and Religious Organizations on the defence of « religious moral values » in the service of a « traditional vision of the family and marriage », and therefore encounters the same limitations in its contribution to peace-building in Ukraine.

Last year, they organised an event entitled « Theatre: Talent and Energy for Peace Building and Togetherness », in partnership with a local contemporary theatre company: the Silver Island Theatre. They staged a participatory play, performed in front of an audience of students and writers from different communities, which addressed several social issues in Ukraine. They also carried out the project « Poetry: Creating Peace. Together »: a poetry club bringing together students of different religions, who worked throughout the year on themes related to peace and creation.

In partnership with the Libertas Center, Masterpeace Club also set up an exhibition of religious objects from different traditions, with related explanations, to reduce prejudices and stereotypes on the issue. The exhibition is travelling and has already been shown in several regions of Ukraine.

Institute for Peace and Common Ground

The Institute for Peace and Common Ground promotes dialogue as a central practice in reconciliation processes. It works at different levels: locally, for example, it carried out the project « Dialogue in Kremenchung », which made it possible to work for 6 months on the oppositions and divisions that animated the city community. The pro-government and independentists, the opponents and supporters of the Euromaïdan movement, the local authorities and the citizens were able to debate and dialogue on the basis of documentaries made for the occasion and presenting the different narratives existing around these issues.

A similar process was set up at the regional level, in the framework of the « Understanding through dialogue » project. The institute brought together activists from 12 regions in Ukraine and asked them to identify the main points of tension and stereotypes held by their populations. A local dialogue was opened on these sources of division, and a chain of communication was then set up between the different regions to combat regional polarization in Ukraine. This project also enabled the networking of the activists and non-governmental organisations involved, to enable them to exchange on their common challenges.

National Association of Mediators of Ukraine

The National Association of Mediators ensures that local experts are trained and consulted by the authorities in conflict mediation processes, especially in the context of the war in the Donbass region. Every year they organize a « Forum of Mediators and Dialogue Facilitators » which allows all professionals in this field to exchange best practices and to question their common challenges. This forum was born from a local initiative, led by the regional group of mediators in Odessa. The association also produces educational material for actors in the justice sector to enable them to address the challenges of restorative and transitional justice. Lastly, the National Association of Mediators is conducting research projects with UN Women to address gender issues in peacebuilding and reconciliation processes in Ukraine.